Mr Mandeville’s "Milkfloat Memoirs"  or " 'Ow Many Today Missus?" ... soon to be self-published (as usual) 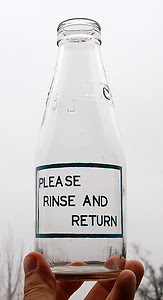 Sean Mandeville the famous emailer of all people using the internet is set to put his long un-awaited memoirs into a self-published book or e-book.

‘Twas with heavy heart though that he sat down with quill and ink (or possibly “byro”) to compose his memoirs of days gone in old-blighty … days when Benny Hill was top of the hit parade with "Ernie The Fastest Milkman In The West"; when your good old "milkie" would greet his customers with Pentax 35 mm and ask you if you could chuck up a good old salute..for a bit "of fun, ha ha ha … laugh me old matey". Then, when handing over your gold top milk bottle swear to you he would not put them on the internet when it was invented!!!! 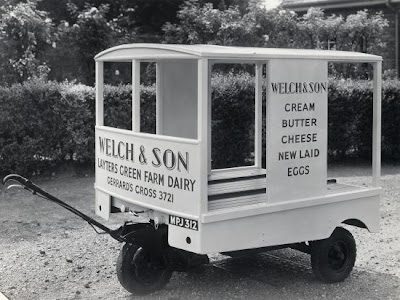 When old "Rupert" (Mandeville’s dear milkfloat’s) would strain up Highgate Hill West towards the Highgate Cemetery. The Vamps lapped up Mandy’s gold top. Everyday he would visit the vampires at Highgate, and it was strictly first name terms in those days I can tell you.

“You know,” (Mandy told them one day) “I’m going to write a book on you lot one of these days, but I need a book to copy from first. Then adjust paragraphs and sell it to some mugs.
I have a great chum called Macca who is a real spliff of a laugh and does what he is told. Plus he has a girlfriend who is "game for a laugh", and likes to have fang-bite-marks painted on her neck with a pen.

Then I shall copy out (but care to change those old paragraphs to avoid that old banana skin??..copyright...) some garbage and, presto! Sell some.

Then I could become a legend (in my own mind ... difficult I admit as I lack one), and no one will laugh at me in tea shop anymore.

The world will be told of my adventures with Rupert (my beloved milkfloat.) Damn though ... Damn the day they sacked me and took Rupert from me!!!  (sorry I was overcome with emotion then).
I overslept after watching a late showing of my fave ever film, Norman Wisdom in the “Early Bird”. Got a “late for work” and was sacked, and Rupert taken from me.

It was any excuse for a duel in those days, I can tell you. Everyone was at it!


But there was more to this than met the eye. Kevin loves Leonard Cohen ... so it is  obvious that Kevin had me sacked from my milk round in Seven Sisters Road. With his love of Cohen it is clear that Kevin even at such a tender age had been trained in Tel-Aviv by Mossad, in "Milk-Sabotage." I knew this as my customers complained that their Goldtop had been opened and the cream taken. The Buddhist, people-loving liberal Kevin was to blame. He said at the time "I think it is the starlings and sparrows, " but I knew the truth which is why I spent so many years investigating him undercover whilst pretending to be his ‘friend’. Apart from Leonard Cohen, on Kevin’s Facebook (he blocked me after the visit to my shrine, the cad) ... he openly admits he admires Martin Luther King, Gandhi and other black or immigrant types..

I knew then I had to carry out a long term vendetta against people who did not do as I said and wanted – and did not treat me with the respect I obviously deserve. It was a start of a lifelong war  against the human race (except my good chum Macca of ...fangs-fame) who knew too many secrets of mine to enable me to dump the thicko.

I started sending letters to peoples homes ...I liked that as I could not be held accountable and could hide (my fave ever trick of all time actually) away and not be seen.

I bought my first nazi uniform and stood to attention for hours in my bedroom. My bedroom mirror was actually a full length job. The Co-op (Holloway Road) were doing a nice line of full length mirrors, so I bought a real corker.... and; did I look lovely in my uniform or what?? But I had to claim copyright and have it banned for fear of you peasants seeing it. Fear not though, as I had my dear old friend (now a hate-blogged friend but aren’t most of them?) dress up in the uniform too, and the photo I took of him well ... I am proud to show you that plus the usual never ending blogs of how evil he is and how wonderful I am. Thanks for the photo Johnny.

Then we come to the person I thought so much of !!!!!!!!!!!!
He was the subject of many blogs from me ... how wonderful he was (Do you remember? How I used to praise him ?), how his photos were the centre piece of a book I more or less copied (but being a clever sausage I changed the paragraphs a bit) ... but what happened?? After 37 years of working on him when I really went for the "kill" and tried to get him to join the ranks and voices of the dead battalions, he told me to stick it ...well I had a photo of him ha ha ... he forgot about it.  Unlike JP he would not dress up but one day I said “oh ... go on … just a quick salute for a laugh” !! Guess what folks? He did ... GOT HIM ... but lol when I published it he said he was sorry and people believed him.
How could they not believe me? I’m so cuddly!

Now you all know that I have admitted going to meetings with Oswald Mosley in the 60s, and  have seen me at my house in a semi-uniform. Well I then of course was in love with the whole thing. Now it has been a lifetime of love.
I really want to post the photo of me looking quite bloody lovely actually in ss uniform
The reason I have had it banned from the internet is that I am trying to come over all sweet and moist and jolly nice, old chap, therefore photos like that I can only post of people I have caught out ... ha ha I am clever you know. That friend who hates anything right wing (now another hate-blogged ‘friend’) would only ever do one stupid salute. Look at his face!! It took me 37 years of my precious time to get him to do that. Ha ha I knew I had him then.
Imagine my horror and anger when I posted it and thought everyone would say it was....I....who was the good boy … and yet EVERYONE still thinks I’m the Nazi ??!!!

I went to meetings with the great Sir Oswald Mosley, and knew then that my milkman days were over and that I was destined for greater things ... but first I joined a few witches in Highgate to see if the old spells that this lot do actually work.
“Magister” !! I demanded to be called.......I have always wanted a title, any title really; Lord Twat perhaps, or Magister as that would scare the pants off some people ... not “Adolf the merchant banker” though - it used to really hurt my feelings when the boys at the baths called me that, although I didn’t mind the Adolf part one bit!

Of course if anyone does not call me by my title (whatever I may be using at the time) ... I punch his lights out ... oooppss!! I mean … eerr … pax vobiscum, bless you my son, and I am kind.

A few words on my great friend, my benefactor in will ... RASPUTIN. Now Ras (to his friends) lives at "Spliff-on-Sea". His daily medicine requires this ... with a brain-cell count now at a "Guinness Book Of Records Winning Entry” (below- double figures level) which is just how I prefer him. Phew!! What a man!!

See the enclosed photos as proof of how shocking he is.
Kev is now in his 60th year, and see the photo of him winning the Dubai triathlon at Mamazar Beach Park..(www.supesportsdubai.com for full results) Now I know ... mwah ha ha … that the evil one lives at Mamzar Park Dubai.....so his details may have to be posted (again) along with some nicely photo-shopped pics. 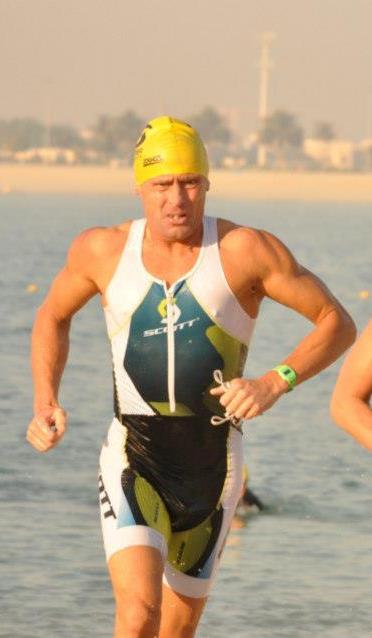 This man, pictured in March 2013 with my secret spy camera, is clearly a THUG! 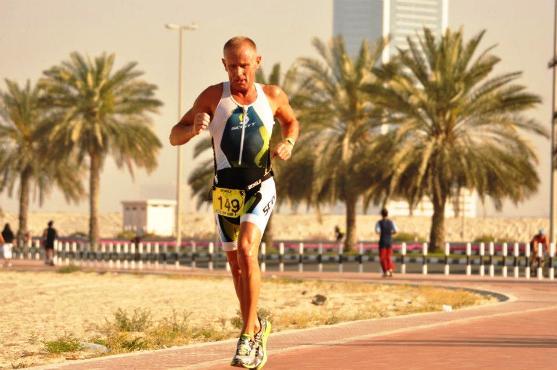 Here he is again, doubtless chasing some harmless old fascist down the street, or should I say dirt track - haven't they learned how to build roads over there yet?

Anyway; see how the over 50 guys he beat all look like Kev ...lean fit etc, but no they are all good friends of Lance Amstrong and have been seen out together......well!...Need I say more? 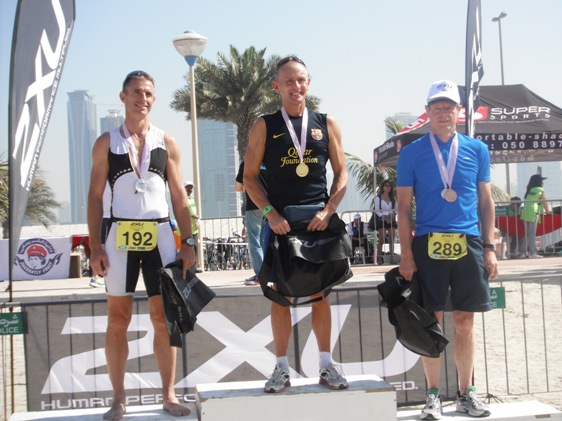 Satanists the lot of them!! Buyer beware!!
It is not because they lead a strict lifestyle with no drugs and booze and all that organic health food stuff. Satan is at work within these athletic forms, I can assure you of that.  Tis the blood of virgins which helps retain their youthful good looks. Oh yes, this merry band have all sold their souls, which rot in the attic of their lifespan on earth like the Picture of Dorian Gray, storing all their preternatural evil which cannot be seen with the human eye.
Now you take Rasputin (no one else will). See how robust he looks ! ! Me !! I hear you say ... beached whale you say ... at 16 stone I am near to my old ballet dance weight!

See the photo taken by Kev at the 60th birthday of Rasputin. Note the athletic shape, the muscle definition of countless hours of training. 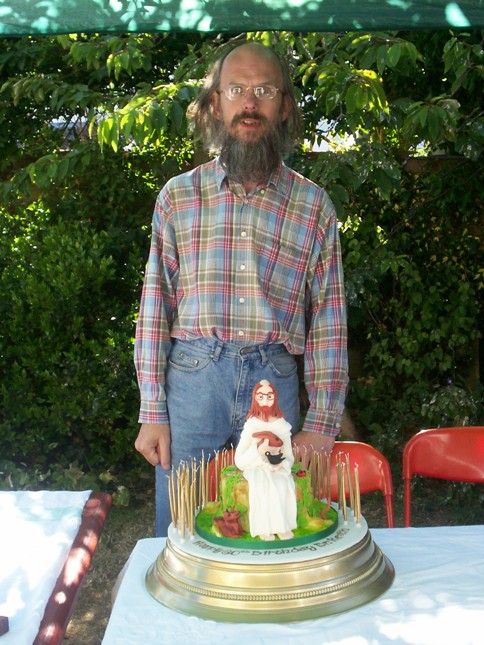 Note now Kev at 60 ...see how he looks!! Now I know you will say Rasputin looks like he has too many visits to Spliff-on-Sea and Kev looks excellent for his age etc. But NO you must believe only ME..I, Mandeville will tell YOU what YOU see, so you don’t need to waste time thinking for yourself ... only I matter so anyone who does not agree can email me then I will write back to you using various names,  and if you still do not believe me I will write a few hateblogs about you..

Milkfloat Memoirs ... that is me for now folks ... "Milkie Mandeville" ...photographer of anyone I can con to give a salute or put on a uniform ... turns me on matey (the only thing that does!!)

Coming soon to a W.H. Smith near you.