Kev Goes Up in the World (literally) !!!

Well I thought I was a good boss – but there are some things I just can’t compete with!  Kev has progressed extremely well with his business ventures in Dubai – so much so that he has recently been attending a lot of meetings in the Burj Khalifa -  the tallest building in the world! One of Kev’s primary business associates has an apartment and vast offices on the 140th floor – just 20 floors from the top. He is about my age but with a few ££,s more than me!!! Make that a few more millions. Just to get a residence at the Burj Khalifa I think your current account needs seven figures!
Here is the Burj Khalifa in all its majesty: 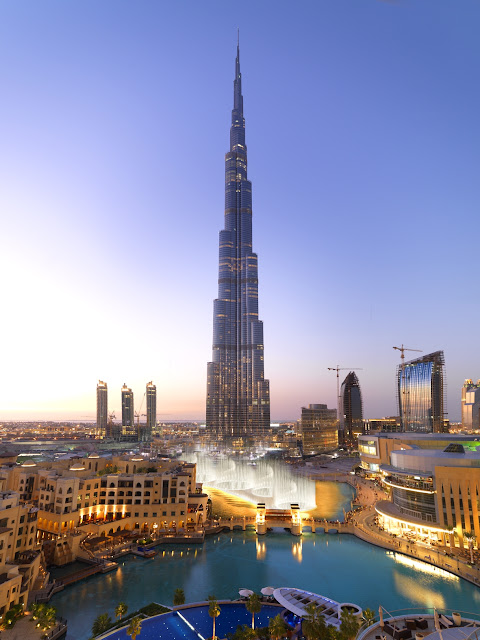 And here's Kev arriving for a meeting - far too hot over there to wear business suits unless absolutely necessary, even with state of the art air con! 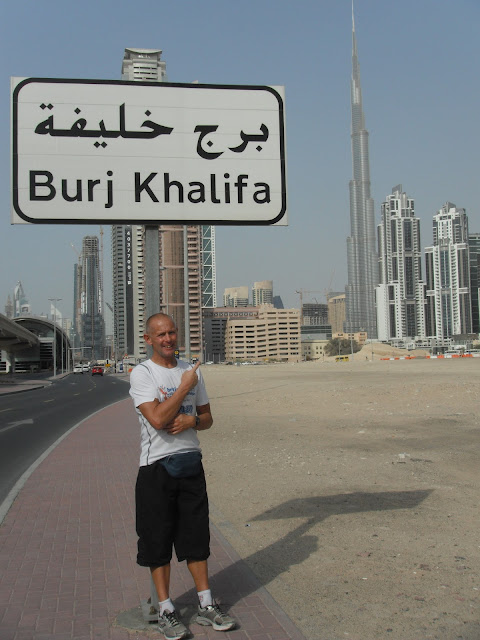 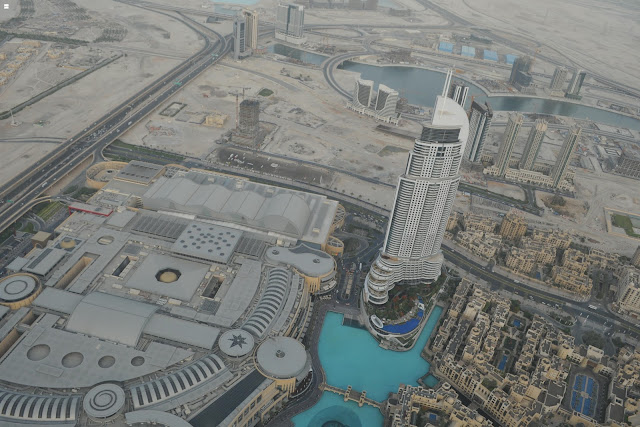 Another view taken from the apartment / conference suite: 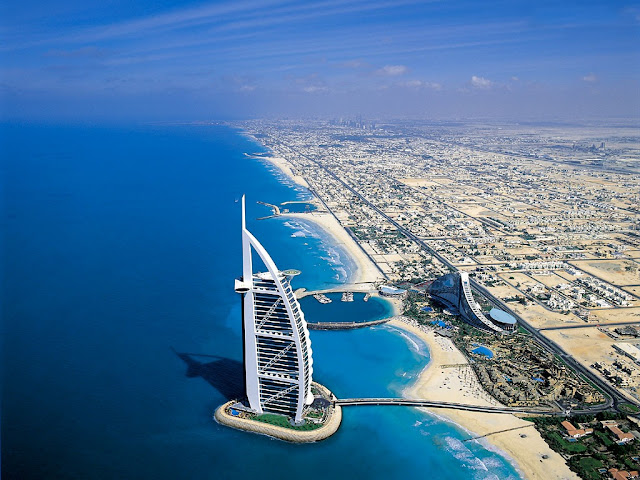 When the sun goes down, this is the view from Kev' s  room.  One of 8 'spare rooms' - well suites, really!!! Which is allocated for Kev when he is staying over for a night or longer. 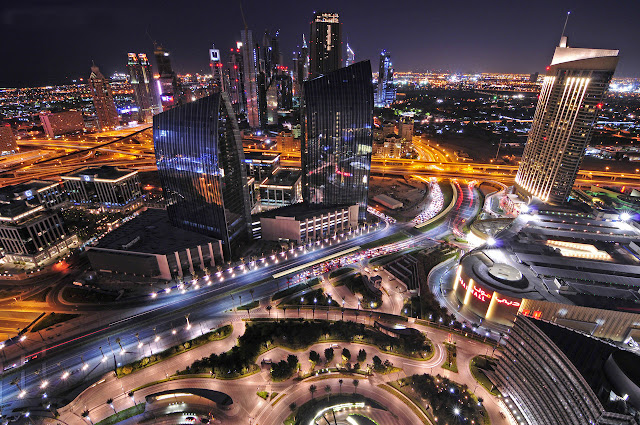 Not quite Boscombe but I am sure Kev will be returning to my humble abode before the Spring is out.
But it's not all work - Although Kev does tend to work 6 days on, 6 days off a lot of the time.
When he is not training, coaching, coordinating or dealing with the media, Kev spends a lot of time socialising with his fellow athletes. Here he is outside his friend Wolfi's bike shop - I think grease must be illegal in Dubai, you could perform open heart surgery in that shop! 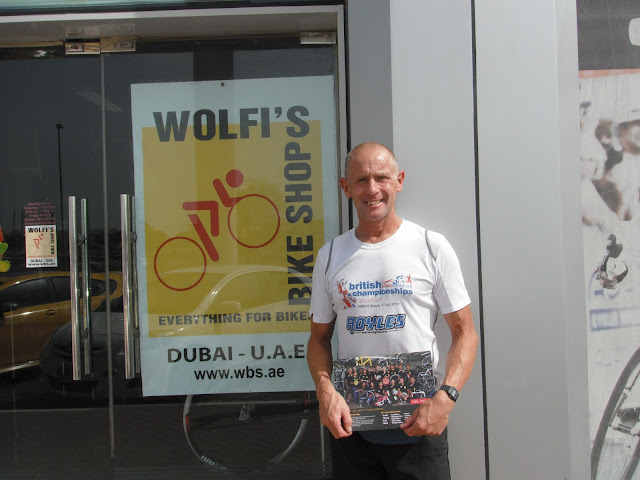 That said, Kev and Wolfi did get caught in a sandstorm last week! And STILL managed to cycle 50 miles in one day!
“Of all things out in the desert on bikes...wow we all jumped into the roadside ditch while he hurled over us..sand in places I best not put down here??? When it had past?? ha ha..desert life...great fun.” 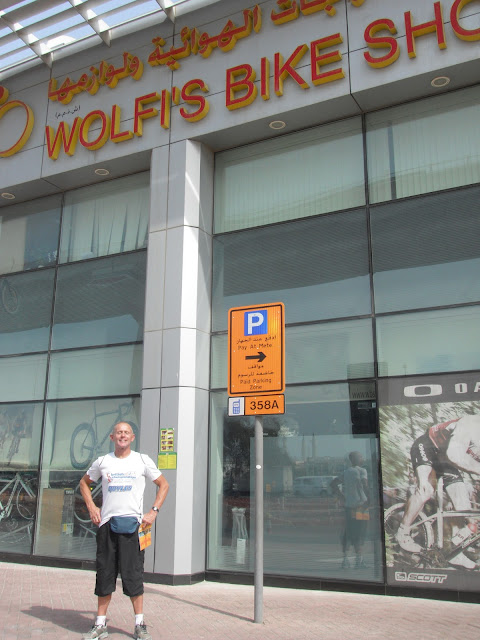 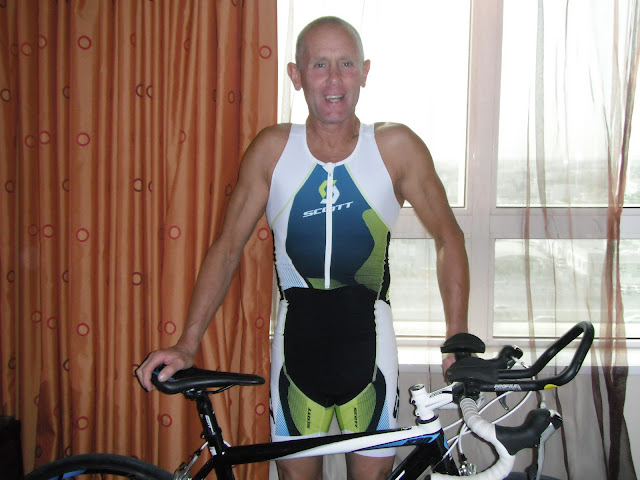 A fashionable place for professional athletes to hang out is at the Organic Foods and Café in the Dubai Mall.  Here is Kev, no doubt about to eat something incredibly healthy, costing 10 times what it would in England! 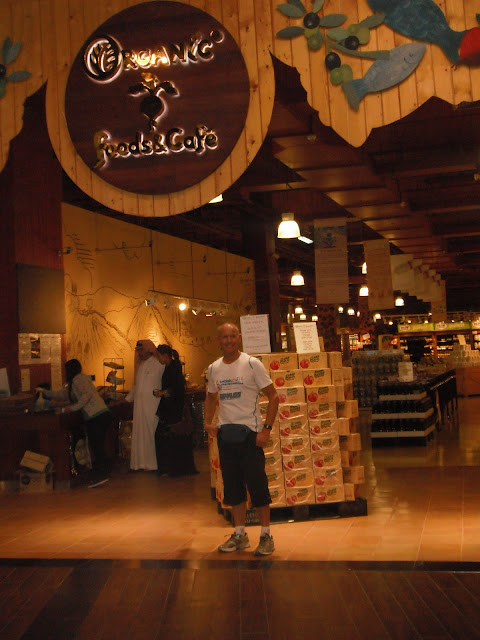 Being in Dubai, the mall doesn’t just happen to be the worlds largest - everything in Dubai is bigger and cleaner than England. As you can see from these photos, the aquarium inside the shopping mall is huge and amazing. Almost like being at the bottom of a warm ocean... 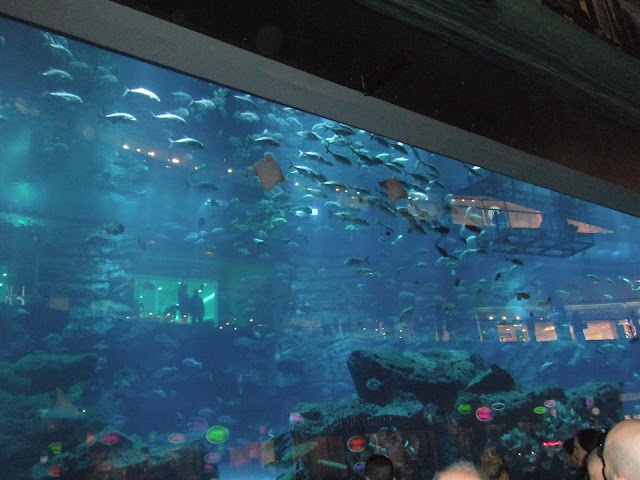 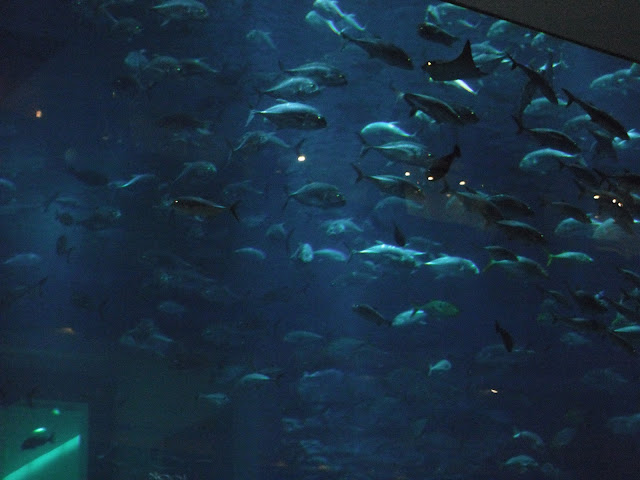 Jealous, moi???! Naturally! No not really. It is so rewarding to see two old friends so happy in their new lives. Who knows, I might even get an invite over soon, hint hint.....
More to come soon about the Dubai Triathlon - in which Kev and Bev scored...... well you'll just have to wait to find out but if I was that healthy at Kev's age I'd be pretty proud of myself I must say! And as for Bev and her rankings  -  Kev's got competition! some lovely photos and great to see them racing together.  Will upload as soon as I get a spare half an hour.
ON a side note, Kev dropped me a line last night which some readers may find amusing, laughing about the differences between his real business partnerships and lifestyle and those being alleged online by Herr Sean -
“I mean..he claims a copyright on a photo of him which he claims is not of him but everyone can see it is even if they do not know him…weird...best one was saying ...I…had bought him all his nazi books…he was changing his lies everyday…one day he is a collector then a shop salesman of nazi stuff...then i have bought everything for him!!! The way he is trying is so school-classroom stuff…at last his lies are falling on deaf ears. He really is going for me…seems i am a business partner now??? And he says he sells all the stuff in his bedroom and as he now says I bought all the books we must be in business??? Well the mad stuff bonky is putting out must be seen as a pathetic attempt to wiggle out of something he cannot escape. Oh...the boss … the REAL boss not the Bournemouth BullS****er, has asked me to go to Cyprus in June to work on this business area for a few weeks as he feels it is not doing well and i could help!! Nice of him to say so!!”
Well I think Kev is right in saying that his most recent travel photo diary illustrates his real career and lifestyle  – as opposed to the one made up for him by Herr Sean -  rather well!
Pip pip,
Raggety
Posted by Kevin Chesham at 13:01