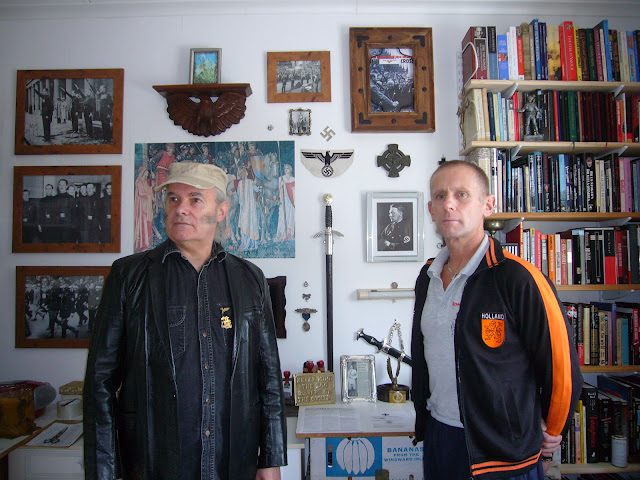 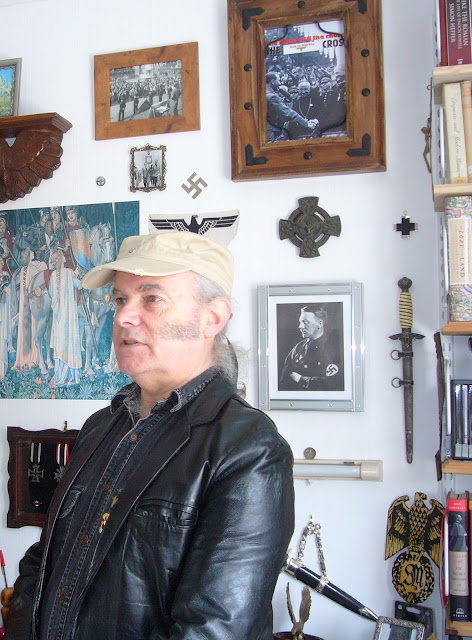 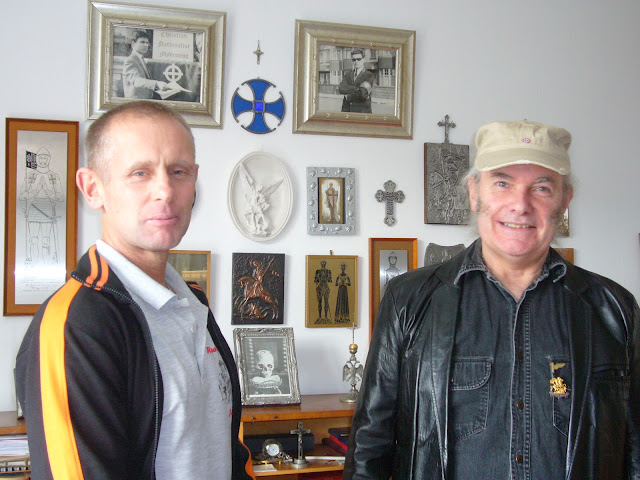 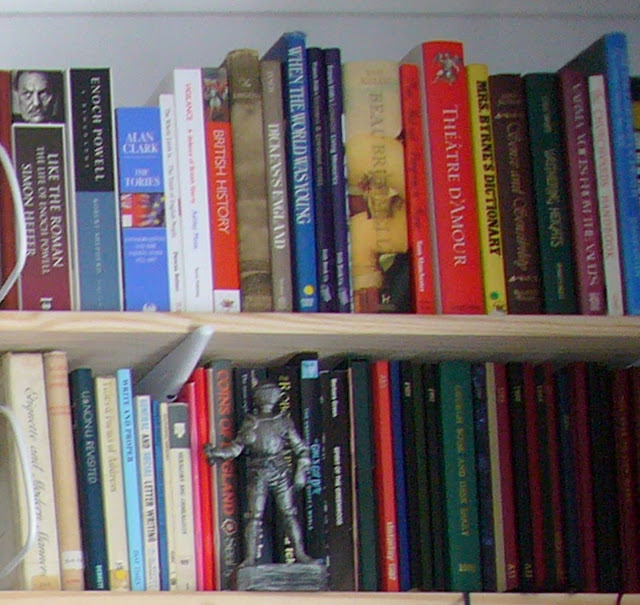 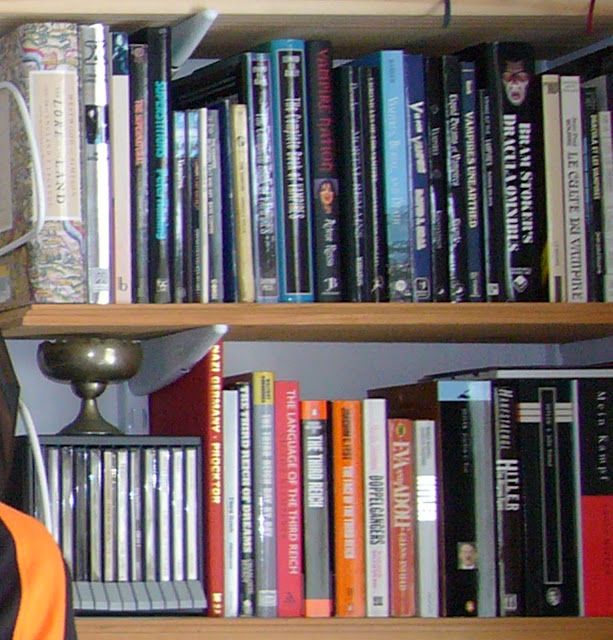 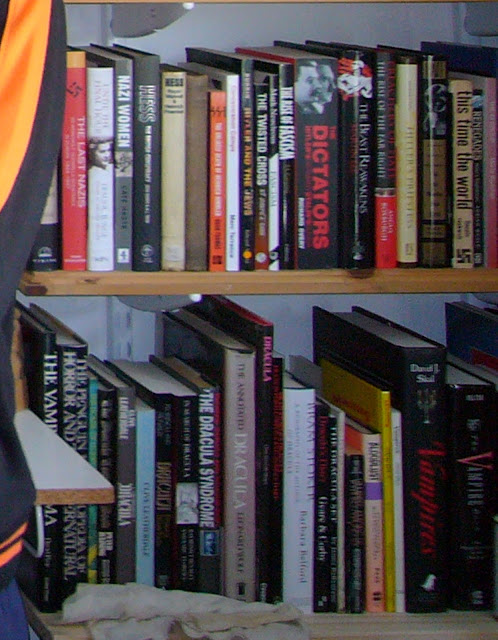 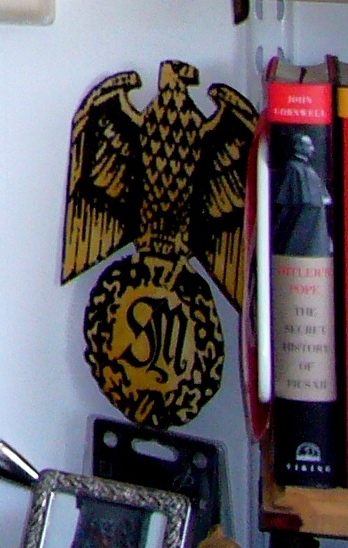 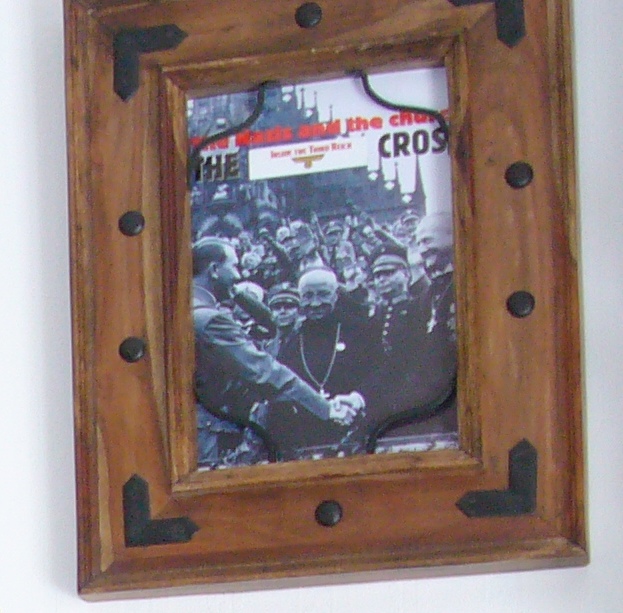 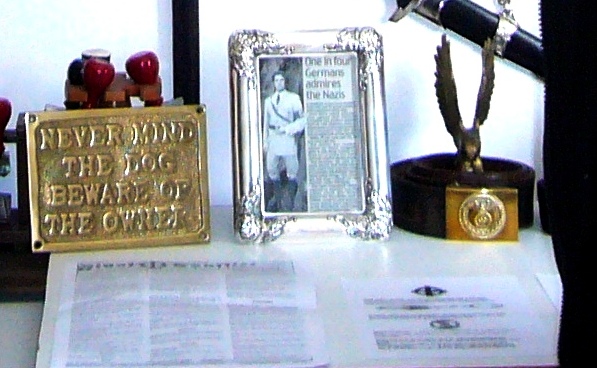 Further to, and as a consequence of this incident, Kev entered a period of introspection, and decided that he would never accept any ‘dinner’ invitations from Sean again. He had seen enough on this occasion – enough to make Bev and himself think very carefully about any future meetings, and indeed, what positive role Sean could ever play in their lives again. As Kev remembers –
I always knew Sean held right wing views. I had attended St George’s Day celebrations at his home, and was aware of his nationalist leanings. However I never realised exactly how extreme these were, and how infused they had become with his own distorted views of reality. My introduction to his Third Reich shrine was really the last straw. I could see nothing of the spirit of Christian love for fellow man in the passion with which I realised he idolised the murderers and torturers of millions of people. This was hardcore. This was real life, and the time for making excuses was over. I rapidly found myself entering the painful process of  internally acknowledging that I had – probably consciously – turned a blind eye to Sean’s vision of an Aryan utopia. A utopia, of course, which negates the sanctity of life of anyone who does not fit into his personal agenda, be they black, Jewish, homosexual, Romany, critical of his homespun brand of Christianity, the list goes on.  The sheer hypocrisy of his lifestyle and attacks on others became intolerable to me. As far as I am concerned, if one is prepared to venerate the views of anti-Semitic mass murdering scum, one has to admit that one would be prepared to be the person who turned on the gas taps in the chambers at Auschwitz. But that is something which I doubt that Sean would ever have the courage to publicly admit to - even if he had the courage to actually do his own dirty work for once. But a picture as they say speaks a thousand words, and I hope that I have given enough context here to rebut his inevitable claims that it is merely the collection of a detached observer.  I regret, indeed, I am ashamed that I did not extricate myself sooner from my friendship with Sean. I am embarrassed that I did not realise that what I perceived to be an eccentric cult of personality (albeit an extremely small cult) was actually a vehicle for aggressive and vitriolic persecution of a large number of people. And not even persecution carried out openly – but via the cowardly and smirking use of aliases. When Sean bragged to me about obtaining the addresses and employers’ details of David’s friends, I humoured him. When Sean bragged to me about handing over personal details of David’s friends (who had no racial or political activities to their names at all) to the neo-nazi activist group Combat 18, I turned yet another blind eye, despite knowing that his desire was to utilise this group to intimidate them, or even possibly firebomb their homes. To these people I can only apologise and say – I learned the hard way. Just because someone has been there for you, does not mean they really care for you, or that they are a good person and all their actions are justified. And I am sorry that I was cowed by Sean’s overbearing demands for loyalty to his ‘cause’ – having now realised – and not too late - that his only cause is himself. I have to live with the results of my inaction – but whatever I can do to make amends – I will. On that you have my word. My only realistic hope in publishing this sad aspect of my memoirs is that anyone who has been similarly duped by Sean's attempts to disguise his own manifesto of hate behind the facade of Christianity will open their eyes - and see him for what he is truly is.
As recounted faithfully by a former friend who has known Sean  for two thirds of his misspent life.
A NOTE FROM RAGGETY:
Well there you have it, folks. A few personal extracts from Kev's autobiography, which I know were very painful for him to write.  I hope I have not given too much away here, but, he did extend to me full permission to publish extracts from his manuscript at my discretion. Raw they may be. Uncomfortable reading, certainly. But I really have to second Kev, when he writes - "The truth sometimes hurts, but better to go through temporal pain than live a life of blissful ignorance." And that is what his book is really all about.
Kev has worked extremely hard to get to where he is today. Not only is he greatly respected within the industry, he is now in a position where he is in demand in some of the most affluent countries in the world. Financial gain has never been a motivator for Kev, and so he has decided, and I back him wholeheartedly in this, to release his book as a free E-Book. He feels that this will ensure the broadest distribution possible. Kev also hopes however that some readers may choose to make a donation to a charity of his choice, Unite Against Fascism or Sport Relief. More details to follow as soon as Kev’s book is ready for publication.